BREAKING- We have Union Election Dates! 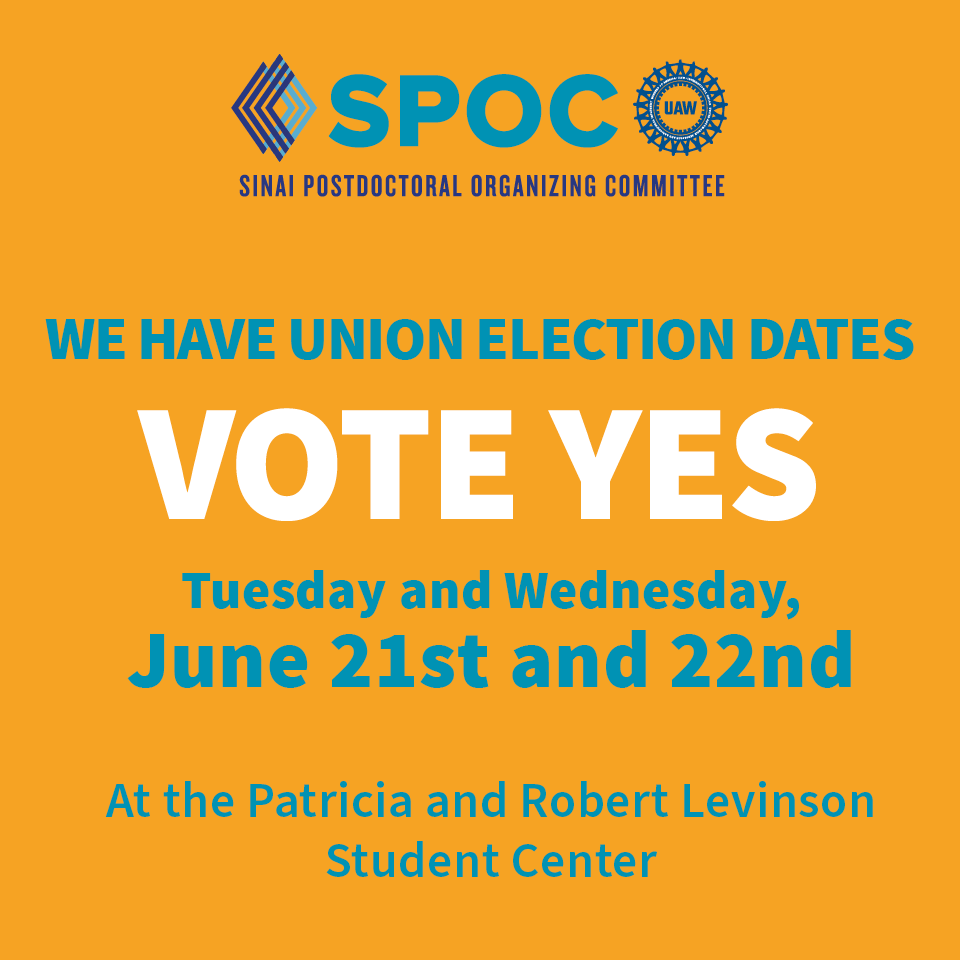 We are excited to announce that the National Labor Relations Board (NLRB) has scheduled our union election for Tuesday, June 21st and Wednesday, June 22nd, in person at the Patricia and Robert Levinson Student Center in the Annenberg Building!

As Postdoctoral Fellows, we have a historic opportunity. If a majority votes “yes” for our union, Sinai Postdoctoral Organizing Committee-UAW (SPOC-UAW), Mount Sinai will for the first time ever have a legal obligation to negotiate with postdocs as equals over our pay, benefits, and workplace rights. The more of us who participate in this important decision and vote yes, the more effectively we will be able to negotiate for improvements with the Sinai administration.

As we approach our union election, Sinai may continue to take actions intended to persuade postdocs to vote “no”. We encourage you to pay attention to empirical evidence and keep in mind some basic information about collective bargaining:

1. Unions provide a stronger collective voice. Tens of thousands of academic workers in the UAW have used collective bargaining to negotiate improvements at research institutions across the country, from enhanced compensation and benefits, to more rights for international workers and enforceable protections against harassment and discrimination. Read about some of the major gains unionized researchers have won at other institutions.

2. Unions provide a democratic voice. As Sinai postdocs, we make up our own union. We will elect a bargaining committee to negotiate with Mount Sinai, we will decide and vote on our bargaining priorities, and we will vote on any contract before it goes into effect. Other postdoctoral unions have consistently shown robust democratic participation – for example, a majority of over 1,600 unionized postdocs at Columbia University voted by 99% to ratify their first contract in 2020 after winning significant improvements.

3. Unions enhance researchers’ power on national policy. We are part of a growing national movement organizing in academia, with 100,000 academic workers who have already become part of the UAW, including the largest number of unionized postdocs. Unionization has provided researchers with a bigger voice to advocate nationally on important issues like expanding federal science funding and international researcher rights.

If you have any remaining questions about collective bargaining, please don’t hesitate to reach out to us at info@sinaipostdocunion.org so that we can help address your concern, or check out our website FAQs.