Let us know if you can make it to our first Union Town Hall!

We are excited to announce that a majority of Postdoctoral Fellows have signed authorization cards in support of forming our union, Sinai Postdoctoral Organizing Committee-UAW!

Reaching majority support is an important milestone. Once a strong majority of Postdocs have signed authorization cards, Mount Sinai may choose to voluntarily recognize our union or we can file for a union election with the National Labor Relations Board (NLRB). In an election, a majority of those voting must vote in favor of forming a union in order for us to start bargaining collectively with Mount Sinai. We will not pay union dues until we have successfully formed our union and voted to approve a first contract.

To meet up and discuss our progress, we have several upcoming Union events for Postdocs at Mount Sinai. RSVP here for any of the events below to let us know if you can make it! 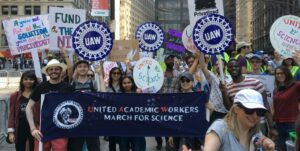 Columbia University Postdocs participating in the March for Science to hold elected officials accountable for protecting research. The UAW has been a national co-sponsor of the March since 2017.

Please don’t hesitate to reach out with any questions or thoughts,